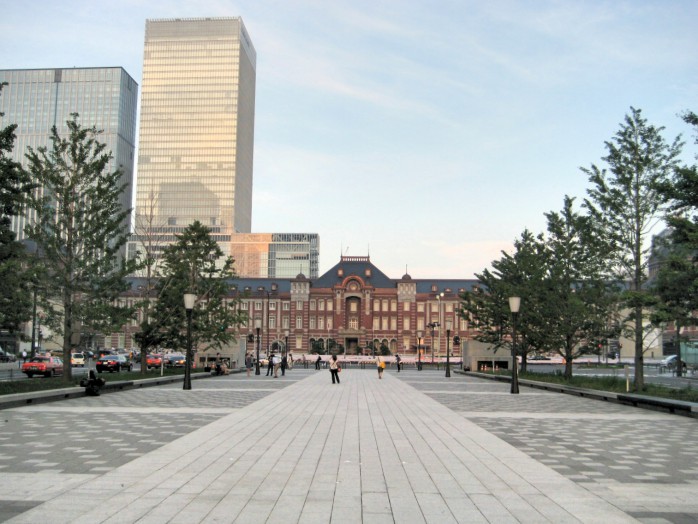 The skyscrapers form the modern townscape.

The building has nostalgic appearance as if it resisted to the skyscrapers. 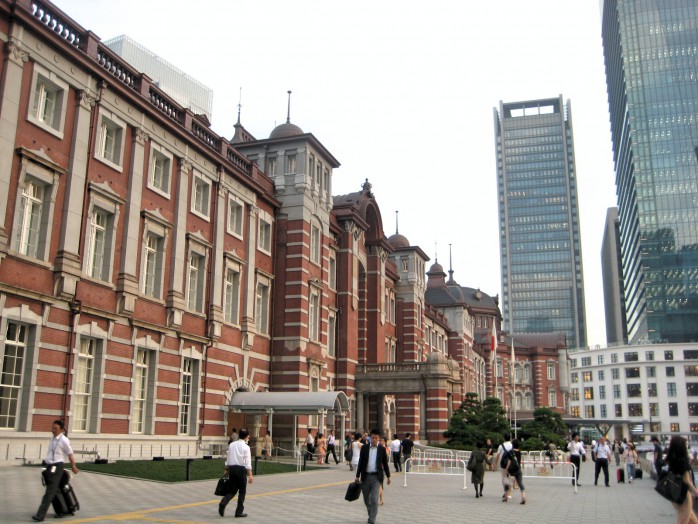 Therefore the unobtrusive presence normally from speaking at the height of the building is the most conspicuous presence around.

The elegant building made of red bricks which started operation in 1914 with name of the Tokyo Station has greeted 100th anniversary in 2014.

By the way, if you would like to take a photo of the Tokyo Station, I recommend to go to the terrace of 6th floor of KITTE where is the front of south entrance of Marunouchi. 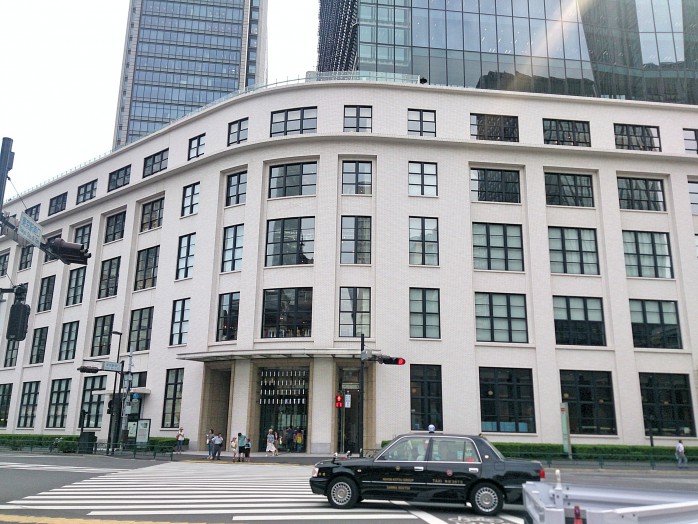 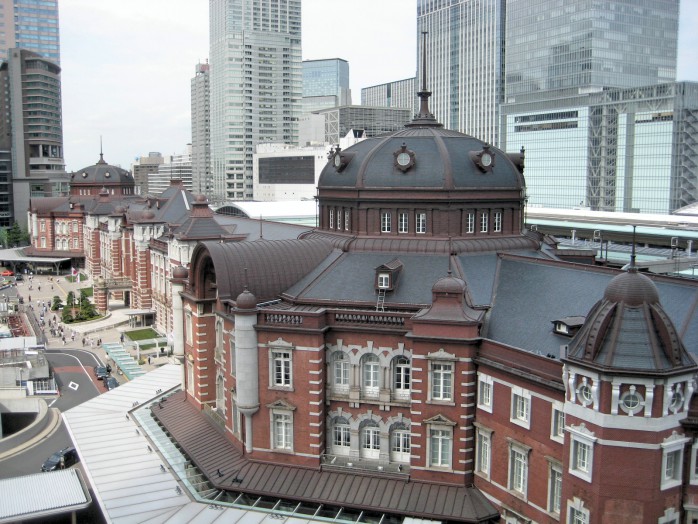 ↑The Tokyo Station from KITTE

The large numbers of people have departed together with various purposes to all over Japan from the Tokyo Station which is entrance of capital city and has the most number of platforms in Japan. 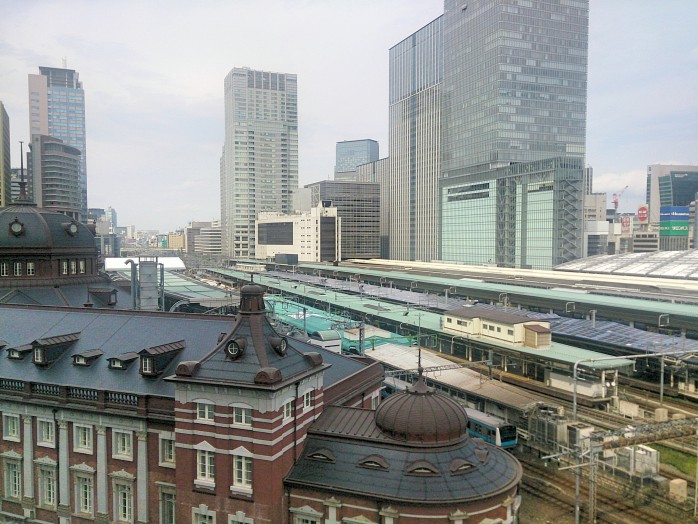 And also, the large numbers of people from all over Japan have come down to the Tokyo Station. And the people have left marks of history on the floor.

The Prime Minister Takashi Hara was walking toward the ticket gate to attend a party conference of Kyoto on 4-Nov-1921.

A young man attacked with a dagger and stabbed in the right chest of the prime minister. He was given emergency treatment, but died.

It was a crime against the dissatisfaction of the brute force policy of the prime minister.

You can find the mark of disaster site on the floor near the ticket gate of south entrance of Marunouchi. 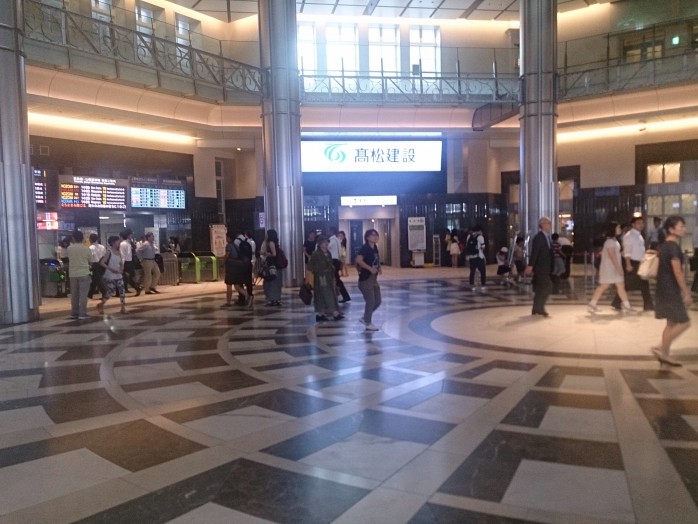 ↑The south entrance of Marunouchi. 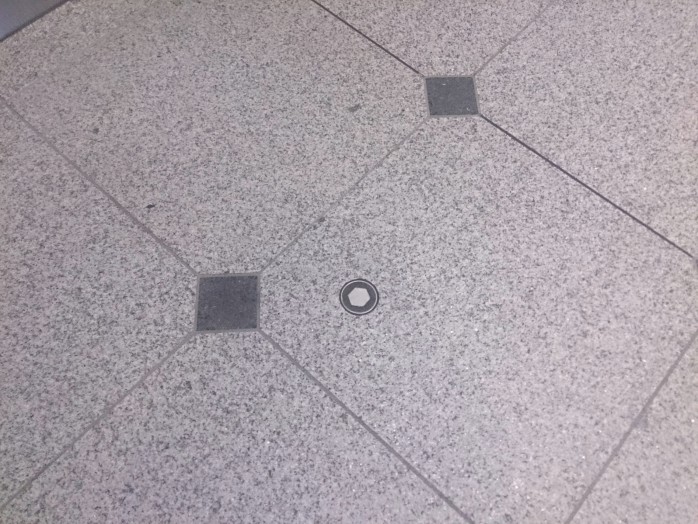 ↑The mark of disaster site of the Prime Minister Takashi Hara.

In 1930 when is 9 years after from disaster of the Prime Minister Takashi Hara. The Prime Minister Osachi Hmaguchi was shot when he was walking on the platform to attend the military exercise in Okayama. He was saved from death on the situ, but 10 months after, he passed away on 26-Aug-1931.

You can find the mark of disaster site for also the Prime Minister Osachi Hmaguchi on the floor of centre passageway of the Tokyo Station. 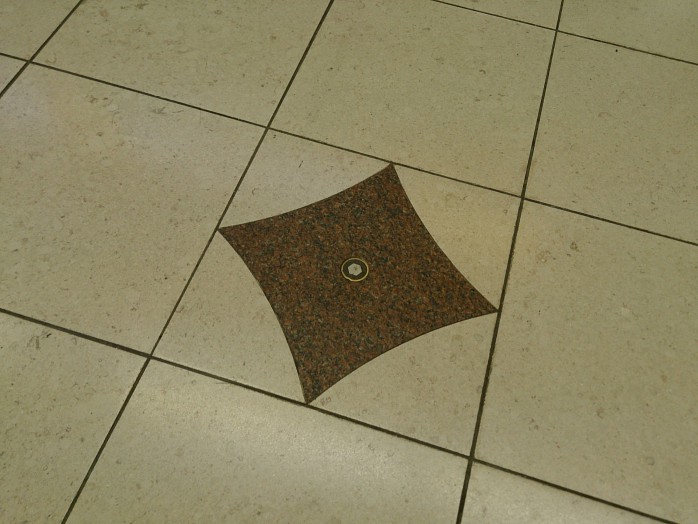 ↑The mark of disaster site of The Prime Minister Osachi Hamaguchi.

Well, let’s change to the positive topics from the negative topics.

It is Shinkansen (Bullet Train of Japan)! 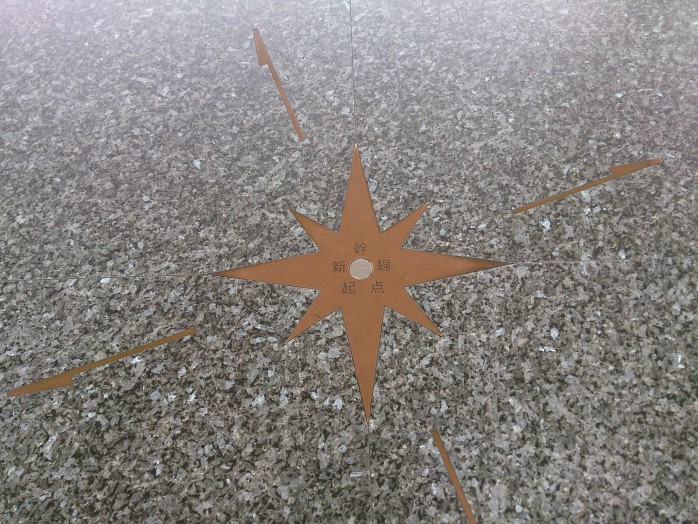 ↑You can see the mark of 0km point of Shinkansen on the floor of No.18 an No.19 platform.

The selling point of Shinkansen is the speed.

However, when we see the “World fastest point-to-point average speed in commercial operations” of Guinness World Records (Oct-2015), Shinkansen is behind TGV of France.

Even though, you should be able to agree Shinkansen is the best train in the world if you read following commentary.

The delay has always happened in other countries, even in UK which is the birth country of railway.

On the other hand, the delay will not happen unless special things in Japanese in spite of minute-by-minute departure and arrival.

For example, when we see the train schedule of the busiest time zone of Shinkansen, the departures in the Tokyo Station are 20 trains in 1 hour, it means 1 train in 3 minutes.

If even a little time is delayed, train schedule will be disturbed.

And please see the following comparison with TGV.

How do you think?

I think Shinkansen is the No.1 train, because Shinkansen can carry 1,300 people at one time with top-level speed, Shnkansen is operated in increments of 3 minutes, even though Shinkansen has never had an accident. 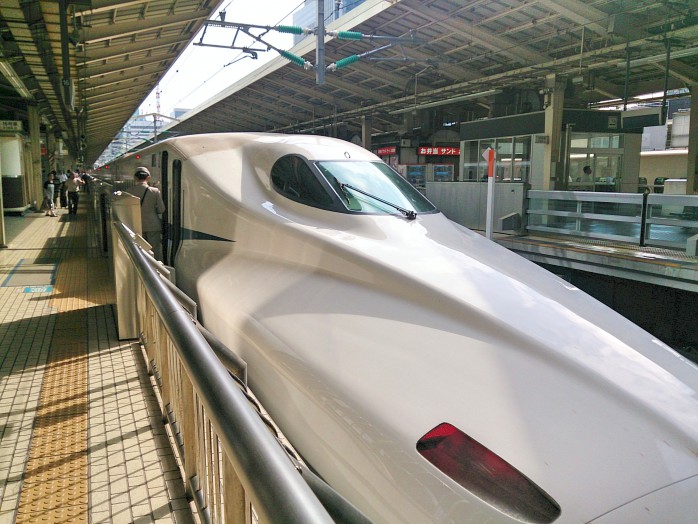 Japanese has constructed Shinkansen with just 19 years since defeat of World War II.

Finally, there is place I want you to visit when you have an opportunity to use Shinkansen in Tokyo Station.

It is the Shinkansen memorial monument located in front of the stairs where is in the middle of under the platform of no.18 and 19.

You can see the following inscription. 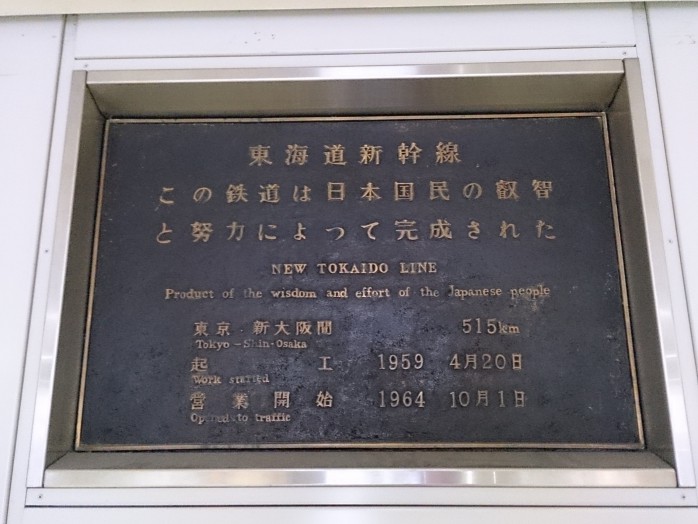 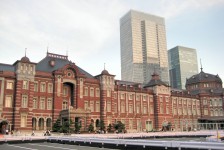 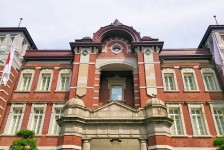 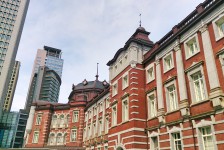 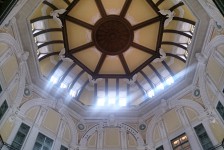 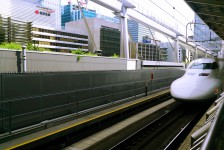 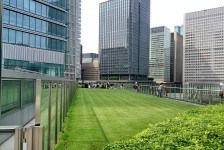 Kokura Castle faced the biggest crisis on the wold history!
Why Kintai Bridge became so an unique appearance?
Scroll