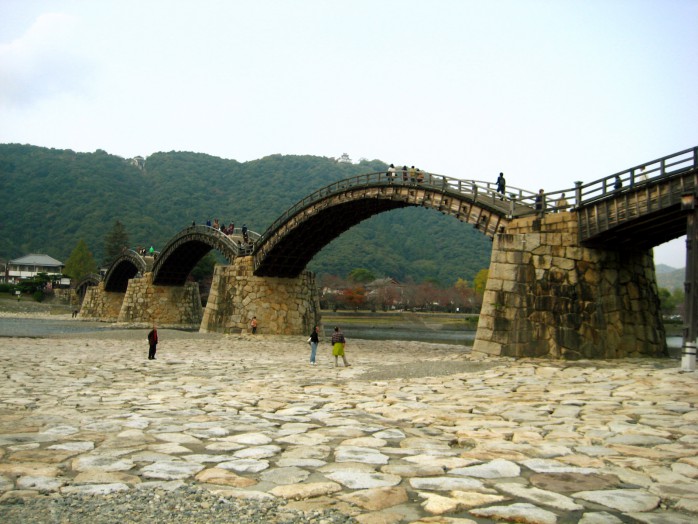 We might be able to say Kintai Bridge is the huge work of art in the shape of bridge! 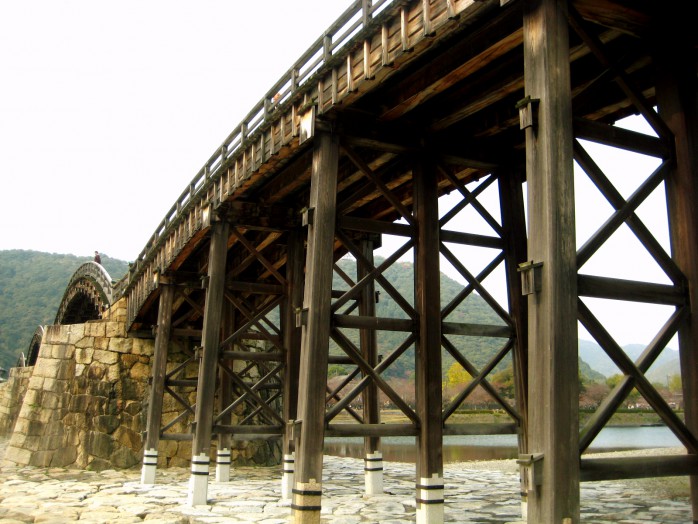 The unique structure is genuine woody arch bridge from the view point of dynamics, and also it is unparalleled only one bridge in the world which is called “Kintai style arch bridge”.

Results of the investigation, it is too high-level bridge technically which is said “The method is consistent with the rules of modern mechanics and it is not room for any improvement”.

In fact, the geometric wood combination looked up from under the bridge makes us feel the height art of building. 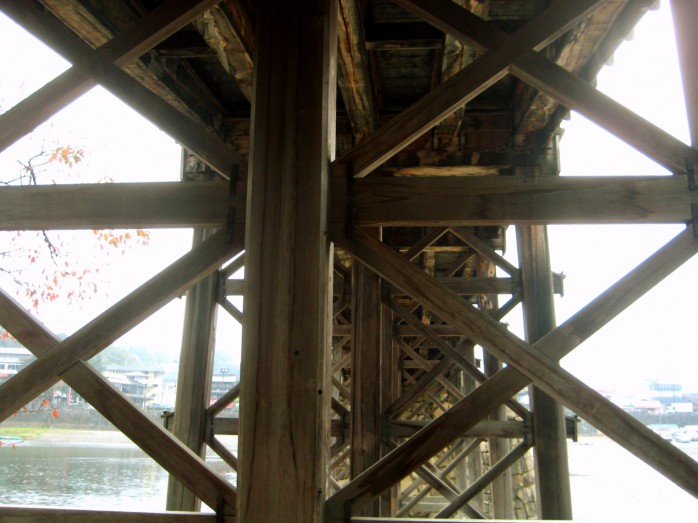 Why the great bridge was completed?

Hiroie Kikkawa who was feudal lord of Iwakuni area likened the Nisiki River that flow so as to surround the mountain to the natural outer moat, and built Iwakuni Castle on the summit in 1608. 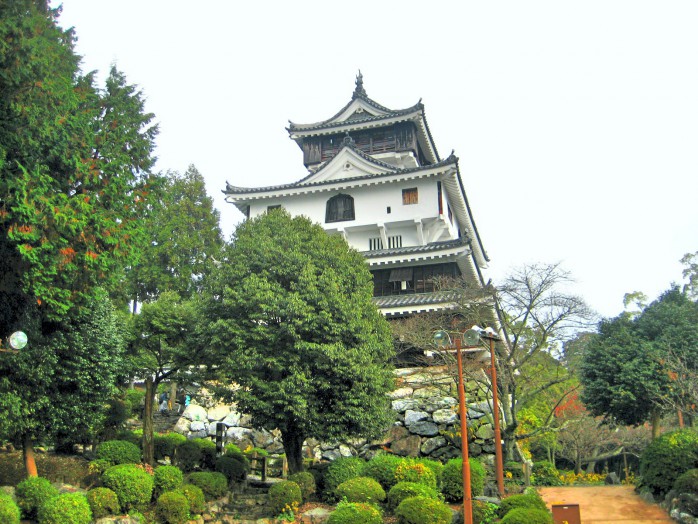 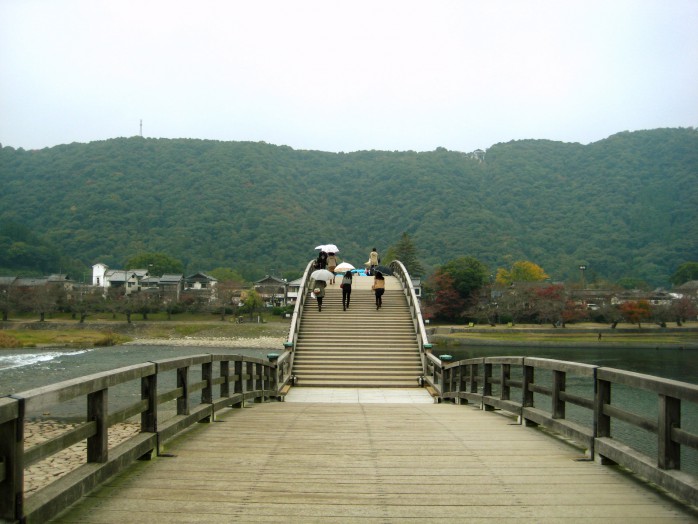 Initially, the bridge didn’t have to be build stoutly, because the Battle of Sekigahara (in 1600) which is famous historical war in Japan had just finished. It means social unrest. Due to that the bridge had to be dismantled easily when war occurs. Therefore the bridge was washed away when there was flood, and the bridge was built again and again.

However the war didn’t occur and the peace continued. Thereupon strong bridge which is not washed away was needed.

Then, Yoshihiro Kikkawa who is grandchild of Hiroie Kikkawa decided to build a bridge which is not washed away.

It is important to cope with the change of the times at any times.

Washing away of bridge is caused by pier destruction. Then, It was studied to eliminate the pier, but it was determined that is difficult, because the width of Nishiki River is 200m.

In this situation, Hiroyoshi knew there was 6 stations arch bridge which was built over from island to island in West Lake Cultural Landscape of Hangzhou of China. He reached to the idea what the bridge has strong piers as island and it is connected by individual arch bridge.

At last 5 stations arch bridge which was combined the best art of building in those times was completed.  However the bridge was washed away by flood in the next year, but it was rebuilt with adding reinforcement of stone wall and so on in the same year. 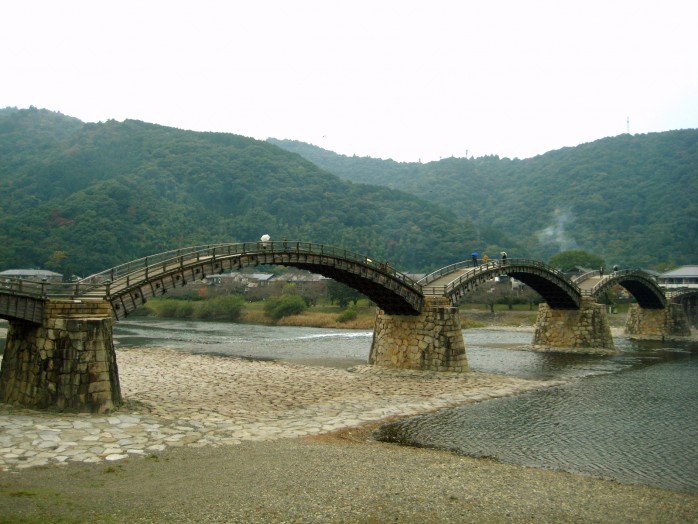 After that, the bridge kept the appearance with regular replacement for 276 years until washing away by typhoon Kezia in 1950.

I am surprised again at fact the Japanese art of building was high level strength from nearly 300 years ago.

Kintai Bridge has been replaced more than 100 times, and has been added improvement. The art of building has been passed by craftsmen.

I think we can see the starting point of current Japanese manufacturing in Kintai Bridge. It is Japanese forte to build up high precision with repetition of improvement.

Kintai Bridge was some way off the highway in those times. Even though, many travelers who used highway took the trouble to drop by Kintai Bridge to see.

By the way, the people who could walk across Kintai Bridge were only samurai and a small part of merchants. It means the bridge is very beautiful that can attract people even impossible to across the bridge. Real beauty has power which can move people.

Now, everybody can walk across Kintai Bridge. So, let’s visit only one arch bridge in the world! 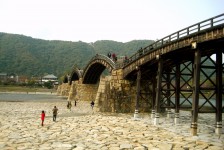 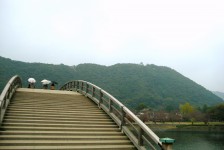 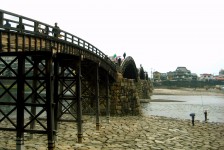 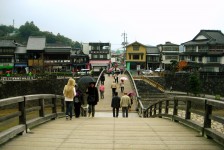 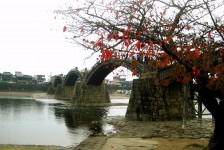 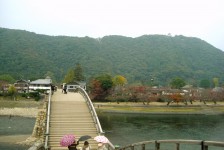 The History which is graved on the floor of the Tokyo Station and Shinkansen as the Japanese pride
The fundamental idea of iPhone were transmitted from Eihei-ji Temple?
Scroll