If you visit Nagashino Castle ruins, you can see the picture that is person who is crucified. 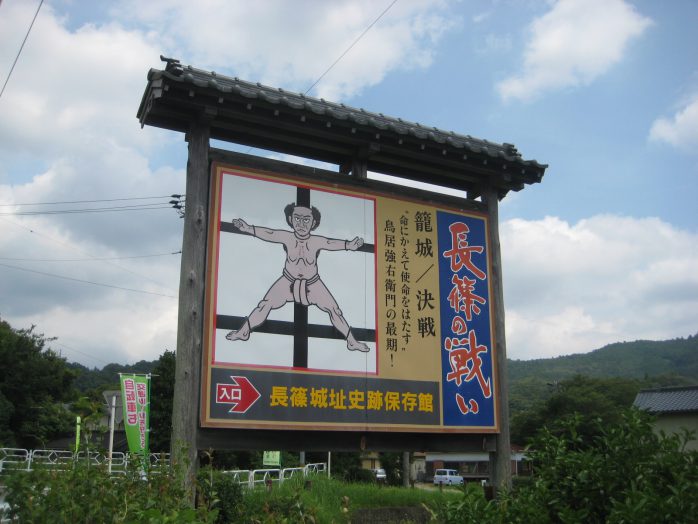 What does this picture mean?

It can be understood if you read the following.

Battle of Nagashino is war it was took between the Allied Forces of Nobunaga Oda and Ieyasu Tokugawa versus forces of Katsuyori Takeda around Nagashino Castle in 1575. 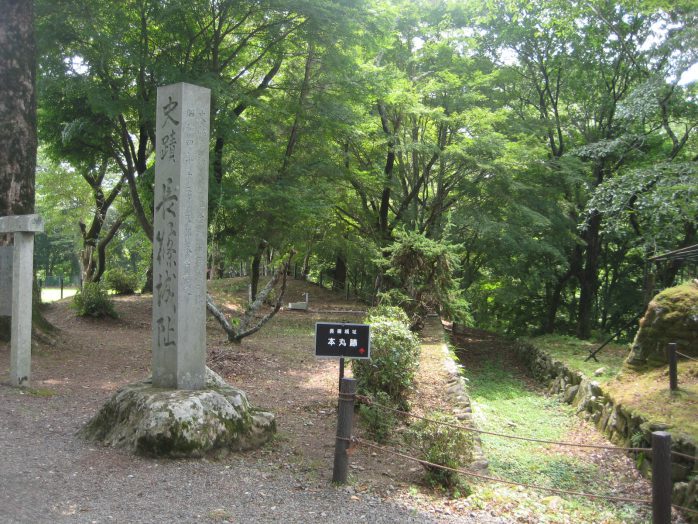 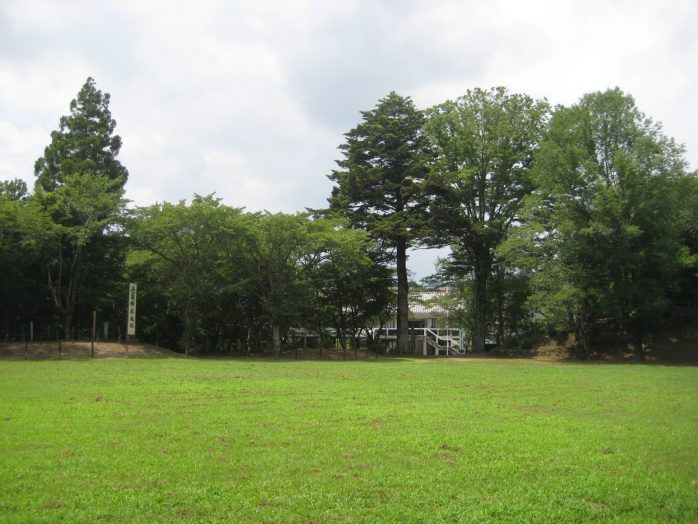 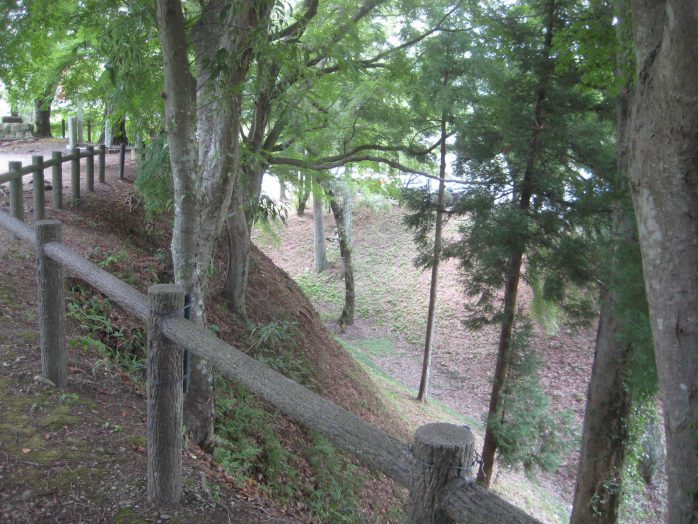 The feature of this battle is that Nobunaga used a gun in earnest for the first time in Japan. 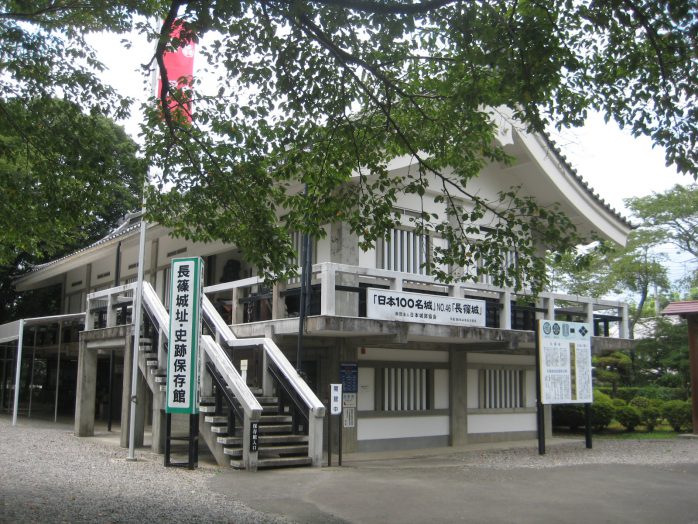 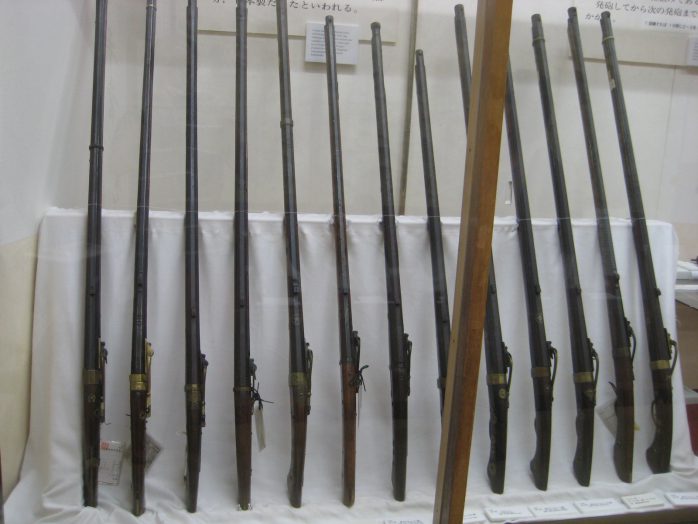 Then, who got the MVP (most valuable player) of Battle of Nagashino?

The person is Suneemon Torii!

“The reinforcements are coming. I have seen with my eyes. Protect the castle for a few days!”

There is no doubt that this message was one of the triggers that led the Allied Forces of Oda and Tokugawa to victory in the Battle of Nagashino.

The road to MVP acquisition is as followings.

Ieyasu’s son-in-law, Okudaira Nobumasa, was defending Nagashino Castle entrusted by Ieyasu with about 500 soldiers, but was surrounded by 15,000 soldiers led by Katsuyori.

Although Nobumasa decided to request Ieyasu in Okazaki Castle for reinforcements, it seemed almost impossible to send a messenger under the circumstances surrounded by the large army of Takeda.

It was Suneemon that offered the difficult life-threatening role.

Suneemon escaped from the castle wonderfully, then went to Okazaki Castle and succeeded for requesting reinforcements. After returning to Nagashino Castle, Suneemon tried to enter the castle in an attempt to convey this good news. However, he was found by a soldier of the Takeda, and was caught near the castle.

Katsuyori who knew that reinforcements of Oda and Tokugawa was going to Nagashino Castle by investigation tried to persuaded Suneemon to scream towards the castle, saying “No reinforcements will come. Give up and open the gate” on condition that not only saving lives but also be treated as a vassal of the Takeda family, if follow the instruction.

And the message that Suneemon screamed toward the castle was “The reinforcements are coming. I have seen with my eyes. Protect the castle for a few days!”

Katsuyori who heard this rages and crucified Suneemon, then killed.

The soldiers of Nagashino Castle who saw that Suneemon risked his life were boosted a lot of morale, then succeeded to defense the castle from attack of forces of Takeda for two days until arrival of the reinforcements.

The Allied Forces of Oda and Tokugawa used 3,000 guns in Battle of Nagashino, but don’t you think the active of Suneeom is equally 3,000 guns?

So, I would like to give MVP to Suneemon Torii!

Suneemon appears in history only at the battle of Nagashino, and the life up to that seems to be hardly known.

It is a good case not only that courageous behavior has led allies to victory but also that unknown person has left his names to future generations. 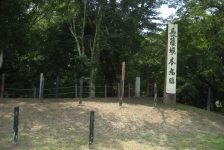 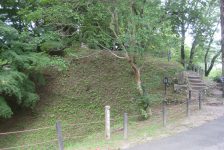 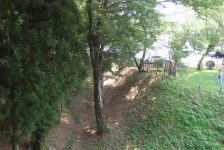 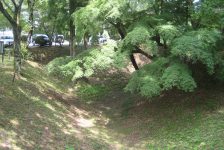 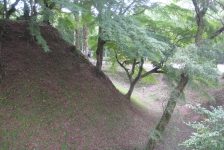 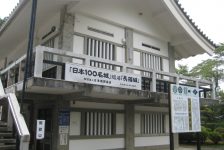 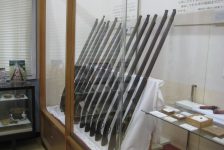 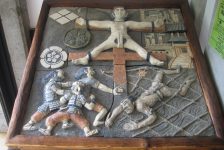 Did the career of tearoom “Jo-an” resonate with the founder?